The End of an Actorʼs Life . . . and the Start of Trust Litigation?

In February 2014, acclaimed American actor Philip Seymour Hoffman died at age 46 of an apparent drug overdose. Hoffman was an extraordinary actor with an incredible range, having played author Truman Capote in Tru, a clever CIA operative in Charlie Wilsonʼs War, a Roman Catholic Priest in Doubt, a professional baseball manager in Moneyball, and a hilarious executive assistant in The Big Lebowski. 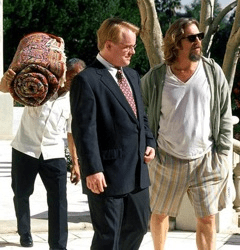 Philip Seymour Hoffman helps the Dude in The Big Lebowski.

According to widely reported accounts, including this one in the Forbes, Mr. Hoffman was survived by three children. However, his will provides for the creation of a trust for his oldest son only. Because he never updated his estate after his other two children were born, there appears to be no provision for them in his estate plan.

Although our law office in Danville, California is a lot closer to Walnut Creek, Lafayette, Orinda and Pleasanton than it is to Mr. Hoffmanʼs home in New York, the story of his stale estate plan is similar to cases we encounter in our trusts and estate litigation practice. Trust and estate litigation is often, but not always, the result of ignored and outdated estate plans. In this case, Mr. Hoffmanʼs oldest son appears to be the beneficiary of Mr. Hoffman’s trust at the expense of his younger siblings. This is not a disparity that the trustee of can resolve by simply dividing the trust into three shares – court involvement will probably be necessary.

Now imagine that the Hoffman children are not minors, but instead are adults. It is easy to see how litigation could ensue, especially given the large size of the estate. In our litigation practice, we have represented both sides of this issue: offspring who were, intentionally or accidentally, omitted from a parents’ estate plans and heirs whose inheritance is being claimed by others. Either way, these issues often get resolved through litigation that has unique strategic considerations.

Of course, the best way to inoculate your estate from this kind of litigation is by updating your will, trust and other estate planning documents regularly. Although an updated estate plan doesn’t guarantee your heirs won’t litigate over your estate after you’re gone, it greatly reduces the likelihood of litigation.